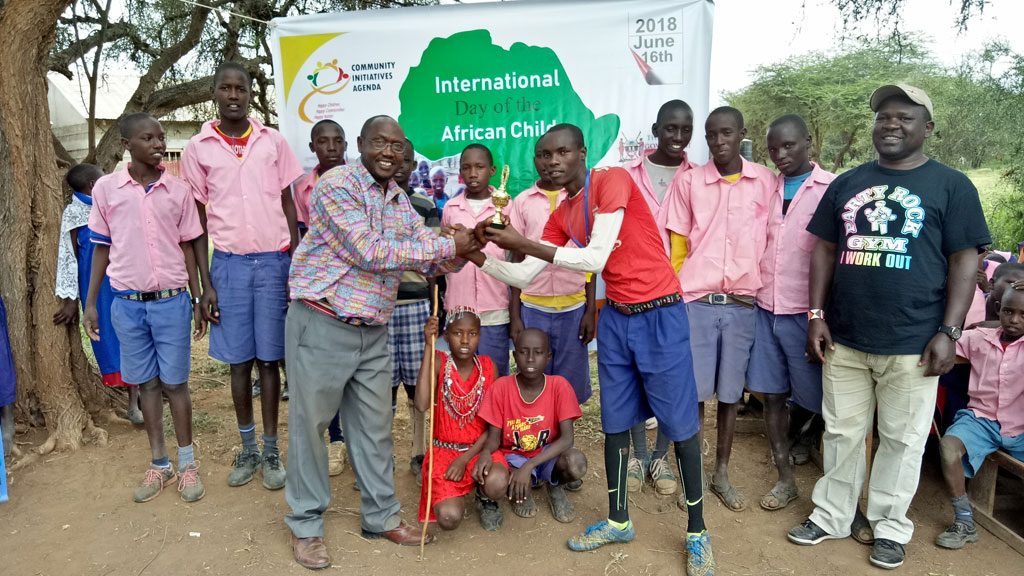 As the World celebrated ‘The Day of the African Child’, I could not help to wonder whether there is still hope for the Kenyan child, who continues to face abuse, orphan hood, disease, violence, hunger, poverty and negligence. My perception changed after visiting Oloolakir Location where Community Initiatives Agenda facilitated children and the community to celebrate the Day of the African Child, an event commemorated internationally on an annual basis every June 16th.

Oloolakir is a remote village in Kajiado County, it stands on the border of Kajiado Central – Bisil and Kajiado South – Loitoktok. The community there had no idea that there existed such a day to celebrate the African Child. Thanks to CIA who brought the awareness of the Day of the African Child to the people of Oloolakir. Despite their difficult circumstances and situations in this very remote part of the Country, the people were full of love and great warmth.  There was pomp and color evidenced in their traditional beautiful Maasai regalia that was worn by both the boys and the girls.

Shouts of joy rented the air as the girls and the boys competed in football and handball matches, this was the first activity done to mark the celebrations.

I could see the unrelenting pursuit for greatness in place of despair, well-being in place of poverty and self – belief in place of doubt on the face of the Children from Oloolakir Primary School as they celebrated and marked the day in dances, folk songs, poems and skits all performed by the youngest children from the ECD class to class 8.

The children also enjoyed a rare treat of goodies, to them it was a party that had never been witnessed in this location. This great community made us feel at home and put hope alive that the future of the Kenyan child is still bright and shinning.

A number of issues and concerns came into play from the songs and the poems that the children performed. They brought out the real issues that hold the Maasai boy and girl child behind in this region.

Teenage pregnancy, early marriages, Cultural practices like Female Genital Mutilation (FGM), Moranism and negligence are some of the issues that I could single out from the children voices and especially in this remote part of the country, where the rate of school dropout is alarming. One new thing that is being observed is the dropout rate of the boy child to prematurely join the business world in the name of sand harvesting and boda boda(motorbike transport)

Mr. James Lemunke, the head teacher at Oloolakir Primary School as well as the area Chief Mr. Wilson Kampaine Lekutuk confirmed to CIA that the same issues have affected learning in a big way and impacted negatively on transition from one level to the other as well as completion of basic primary school.

The Chief attributed the dropout rate to parent’s and other caregiver’s lack of commitment and support for their children’s education. He also blamed them for embracing practices that affect the development of their children.  The Chief on behalf of the local administration pledged to work closely with CIA and other likeminded individuals and groups that are working to improve the quality of life for the Kenyan child.

The CIA Director Mrs. Immaculate Salaon echoed the theme for DAC 2018 ‘’ Leave no Child Behind for Africa’s Development. In her remarks, she emphasized the need for parents/caregivers and guardians to ensure that all children are enrolled in ECD centers and given an opportunity to learn and transition to Primary School and onward to Secondary School. She also made parents understand that children are also gifted and talented in different ways other than education. They should therefore identify these gifts and talents and nurture them accordingly.  She particularly singled out children with special needs who are most often locked, neglected and kept away in very deplorable conditions that strangle their development.

She assured the Community that, CIA is committed to working closely with other partners to ensure that no child is being left behind without an education and in poor health.  She urged the parents and other caregivers not to destroy the future of their children by engaging them in cultural practices that affect their development in totality. She pointed out that education is one of the keys to a brighter future for the children and therefore parents should support all the children to access education.

@ ‘’leave No Child Behind for Africa’s Development’’

Previous ArticleMy Drive to the FieldNext ArticleMotivation and Rewards Project